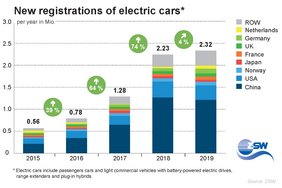 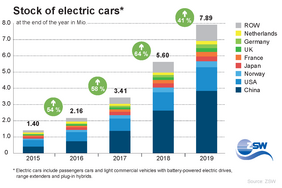 The number of electric cars on the road worldwide had risen to around 7.9 million in 2019, an increase of 2.3 million from the previous year. The number of new registrations again reached a record high, but the growth rate was just slightly up compared to 2018. China remains the undisputed global leader with 3.8 million e-cars. It is followed by the USA with nearly 1.5 million cars. The growth rate for new registrations dipped in these two countries. In Germany, by contrast, the market remained on its positive trajectory, even if the growth curve was not quite as steep. Nearly 231,000 electric vehicles were on German roads at the end of 2019. These new figures are sourced from a recent survey conducted by the Centre for Solar Energy and Hydrogen Research Baden-Württemberg (ZSW). According to its scientists, Tesla accounted for the largest share of new registrations worldwide in 2019 with 361,000 vehicles. German automakers again improved on the previous year’s showing. BMW is in fifth place worldwide with 114,500 electric cars. VW took sixth place.

>>> These and many other statistics on electric mobility are available at www.zsw-bw.de/mediathek/datenservice

New registrations reached a record high in 2019 at 2.3 million vehicles worldwide. However, the global growth rate was just four percent, compared to 74 percent in the previous year. This development is largely attributable to the reduced subsidies for battery-powered vehicles in China and the USA. Even so, the number of new registrations in these countries approached the previous year’s marks with 1,204,000 in China, down 52,000 from the previous year, and 329,500 in the USA, down 31,800 from 2018.

“Although the growth rate for newly registered electric vehicles is relatively high in Germany, the market continues to lag behind,” says Prof. Frithjof Staiß, Managing Director of the ZSW. “This development will have to pick up a lot more momentum to reach the German government’s goal of seven to ten million electric vehicles by 2030."

Two German automakers among the top 10, Tesla is number 1

Tesla also in the lead with 2019 models

Tesla’s Model 3 is also clearly ahead in 2019’s statistics with 297,000 new registrations. Its lead over the runners-up is considerable with the BAIC EU Series accounting for 111,000 and the BYD Yuan for 68,000 new registrations. BMW 5 Series plug-in hybrids achieved the best German result, taking sixth place with 46,000 models sold. The fact that seven of the top ten newly registered vehicles are purely battery-powered merits special mention.

Narrowing the focus to the German market, the statistics for new car registrations have little in common with the global figures. The Renault Zoe defended its first-place ranking with 9,430 cars sold. The BMW i3 was a very a close second with 9,380 cars, a total that includes both the battery-powered electric model and the version with a range extender. It edged out the Tesla Model 3 with 9,010 cars.

“The odd success notwithstanding, the numbers show that German automakers have to step up their efforts on a much broader scale to keep up with the world leaders,” says Staiß. “It is crucial for the German automotive industry that its upcoming e-models achieve market success.” This could also spare German carmakers billions of euros in fines. As of 2021, there will be stiff penalties to pay if the averaged CO₂ emissions for the entire fleet of vehicles sold exceeds regulatory targets. These funds could then be put to better use for investing and creating value in Germany – for example, with in-house battery cell production capabilities.

This report encompasses only those passenger cars and light commercial vehicles with battery-powered electric drives, range extenders and plug-in hybrids – that is, all vehicles that are charged externally with electrical power. It does not factor in full hybrid vehicles that can cover shorter distances with a relatively small battery, but cannot be charged externally; nor does it include mild hybrids and vehicles equipped with fuel cells. This assessment is based on data from the German Federal Motor Transport Authority, government agencies and NGOs abroad, and other sources.

The authors of this report were able to ascertain the number of previously and newly registered electric vehicles in countries worldwide. However, data on specific makes and models is not available on a global scale. This is why the authors based their analysis of newly registered makes and models on data sourced from the 18 largest markets for e-vehicles. ZSW’s figures represent a conservative assessment of actual developments. The paucity of globally available data that distinguishes among registered electric cars by their make and model prompted the authors to use the phrase “cumulative new registrations” for these figures.