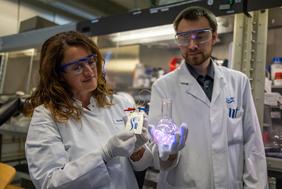 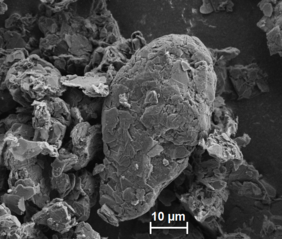 As a sustainable source of critical raw materials, recycling of lithium-ion batteries will play a key role I the future – especially the recycling of batteries that power electric cars. Today’s recycling processes fail to recover every type of metal, with some of the lithium and all of the graphite going to waste. A new approach could change that. In a project called RecycleMat, the Center for Solar Energy and Hydrogen Research Baden-Württemberg (ZSW) in Germany developed a method to recover and reprocess active materials extracted from used lithium-ion batteries for direct use in new batteries. It involves fairly simply chemical processes and the material powders reactivated via this new method exhibit 95 percent of their original capacity. This holds true for both the metal oxides in batteries’ positive electrodes and, surprisingly, also for the graphite in negative electrods. ZSW researchers have already reused and taken electrochemical measurements of these recycled materials in new battery cells.

Funded by the Baden-Württemberg Ministry of Economics, Labor and Tourism with 870,000 euros, this R&D initiative goes by the name of Cathode and Anode Materials from Recycled Lithium-ion Batteries, or RecycleMat for short. ZSW launched the project in August 2020 to develop a resource-sparing way of recovering active materials from used or defective battery electrodes’ cathode (the positive terminal) and anode (the negative terminal). The researchers succeeded with their efforts to mechanically separate, clean and heat-treat these materials to produce reconditioned powders that are as good as new.

“Spent battery electrodes with today’s widely used cathode structure of lithium nickel manganese cobalt oxides and a graphite anode can be reactivated with this new recycling process, and then reused directly in new cells,” says project leader Dr. Marilena Mancini. “Unlike conventional methods, this new process preserves the active materials as such and restores their original functionality for direct reuse in new batteries. This approach avoids the drawbacks of the prevailing method, which entails energy-intensive dissolution and recovery of metallic components and the loss of graphite.”

“Recycling batteries is not just desirable; it is absolutely necessary. The transition to a climate-neutral economy requires full-scale expansion of the circular economy – especially for batteries containing various critical raw materials. But high-quality recycling allows us to help the environment, and not only that, in the long term it will also enable us to reduce our dependence on raw material imports. Given the challenges currently posed by disrupted supply chains, we are thus boosting Baden-Württemberg’s resilience and competitiveness as a hub of business. The ZSW’s research outcomes are making an important contribution towards achieving these ambitious goals and are showing how feasible efficient and resource-sparing recycling really is,” says Minister of Economic Affairs, Labor and Housing Dr. Nicole Hoffmeister-Kraut.

ZSW’s researchers had to develop new approaches and processes to this end, particularly for recycling graphite from the battery’s negative terminal. These days, graphite is usually incinerated rather than recycled. The solution to this problem was a sophisticated heat treatment process that removes impurities from the particles’ surfaces and restores the crystalline material structure. Graphite powder treated thusly retains 95 percent of the original material’s specific energy content and can be used directly in new batteries.

he cathode materials in the positive terminal are the battery’s most valuable components. They contain costly metals such as nickel, manganese, cobalt (NMC) and lithium, among others. This is why the prevailing recycling processes recover these cathode materials by dissolving them fully in acid and then converting them back into battery raw materials step by step. But such conventional methods consume a great deal of energy and require a chemical plant, ideally at a location nearby.

The ZSW’s process for recycling cathode materials is essentially the same as for graphite, so it works without these energy-intensive chemical stages. In just two relatively simple processing steps, the cathode materials are ready for immediate reuse in new batteries. What’s more, they exhibit well over 90 percent of their original capacity.

It pays to recover metals

The focus of the last ten years’ efforts to develop lithium-ion batteries in science and industry has been on increasing energy density while reducing costs. Now that electromobility is on the road to success and batteries are mass-manufactured, end-of-life recycling has become the hot topic. Two factors figure prominently in this discussion. For one, regional and national regulations require recycling, with some calling for rates as high as 80 percent for scrapped electric cars. For the other, the calculations indicate that it will take vast quantities of recycled metals to build anywhere near enough batteries for tomorrow’s electric vehicles.

Lithium-ion batteries do not contain precious metals, but their constituent materials are far too valuable to waste. Battery recycling is economical and even lucrative considering the great quantity of copper, nickel, cobalt, aluminum and lithium to be recovered. To put the potential value of recycling into perspective, one metric ton of ore deposit from a nickel mine contains just some 20 kilograms of nickel.

On the other hand, a typical battery needed to power a mid-range car contains as much as 60 kilograms of nickel. This amount of metal corresponds to 3,000 kilograms or nickel-containing ore that would have to be mined and processed. And this factor is far higher for lithium: With a successful way of recovering and recycling lithium, there would be no need to extract the six kilos needed for a battery from several thousand cubic meters of brine.

The Centre for Solar Energy and Hydrogen Research Baden-Württemberg (ZSW) is one of the leading institutes for applied research in the areas of hydrogen, photovoltaics, renewable fuels, battery technology, fuel cells and energy system analysis. There are currently around 300 scientists, engineers and technicians employed at the three ZSW sites in Stuttgart, Ulm and Widderstall. In addition, there are 100 research and student assistants. The ZSW is a member of the Innovationsallianz Baden-Württemberg (innBW), a group of 12 non-university, applied research institutes.