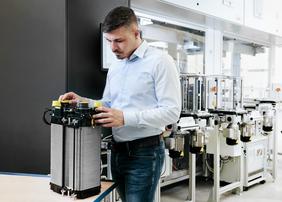 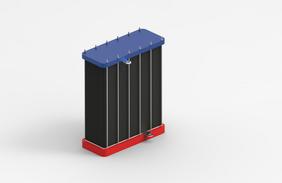 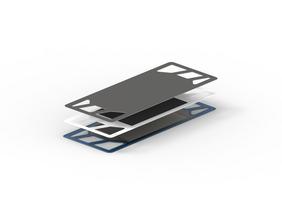 A single cell of a fuel cell stack consists of two bipolar plates with the membrane electrode assembly in the middle. ©ZSW CAD rendering

ZSW and EKPO build an open development platform for the industry.

Science and industry are pushing hard to ramp up vehicle fuel cells for mass manufacturing. A Research-factory for Hydrogen and Fuel Cells (HyFaB) is under construction at the Centre for Solar Energy and Hydrogen Research Baden-Württemberg (ZSW) in Ulm to support this ramp-up process. In this facility, experts are to develop the prerequisites and processes for large-scale manufacturing. ZSW is collaborating with EKPO Fuel Cell Technologies (EKPO) in the design and manufacturing of a generic fuel cell stack that will serve as a pre-competitive, manufacturer-independent development platform. This stack’s size, design and power density will be in line with that of fuel cell systems currently used in the automotive sector. Its components will be available for research projects and business ventures by mid-2022.

“Fuel cells had already been on the verge of market launch twenty years ago. However, they finally did not take off due to lack of hydrogen infrastructure. That is definitely changing now with the European Green Deal and the German hydrogen strategy,” says Prof. Markus Hölzle, member of the ZSW’s Board of Directors and head of the Electrochemical Energy Technologies Division in Ulm. Now fuel cells are under rapid industrialization and on their way as cost-efficient systems into the mass-market. This is what the new HyFaB project at ZSW aims to do.

“This ‘generic’ fuel cell stack will create a sort of universal tool to further improve fuel cell technology. It will also enable us to provide components and even entire fuel cell stacks as a starting point to medium-sized enterprises so they can develop products of their own,” says Hölzle.

A precompetitive offer to the industry

The reasoning behind this precompetitive offer to the industry is that developers of commercial fuel-cell systems generally do not share their operating data, composition of materials, or fuel cell components. This makes it hard for other suppliers, which are mostly medium-sized enterprises, to break into the market. This generic fuel cell stack will clear that obstacle and will provide all interested parties access to operating data and components. The ZSW has outlined what this stack should look like in a preliminary project with the Forschungsverbund Verbrennungskraftmaschinen (FVV), a research association concerned with combustion engines. This workgroup brought experts from automakers and suppliers on board to define the specifications for a universal stack designed for anyone to use.

From sketch to hardware

The concept calls for stack with a maximum output of 150 kilowatts. To achieve that output, the generic fuel cell stack consists of up to 500 individual cells including metal bipolar plates. The advantage of metal bipolar plates is that they can be made with forming processes, which allow high throughput and therefore short cycle times. However, these plates are very thin – just a tenth of a millimeter thick at a length of over 400 millimeters per plate. This presents major technical challenges for high-speed manufacturing lines.

Bipolar plates are crucial components of a fuel cell stack. They evenly distribute the reacting gases hydrogen and atmospheric oxygen on the two exterior sides of the plate to the anode and cathode catalysts. Concurrently, the cooling water flows through the interior of the plates. This can be only achieved by means of very elaborate flow channel designs and a distribution and sealing concept. These structures are simulated and optimized using computational fluid dynamics (CFD).

“Our participation in this lighthouse project, the exposure to the institutional research at the ZSW and the knowledge gained about mass manufacturing as a result of all this offers is adding real value for us. Above all, the HyFaB’s very interesting fuel cell stack production network – which includes the ZSW and the Fraunhofer ISE Institute at Freiburg with its decades of experience in fuel cell research – is tremendously important to the automotive and industrial hubs of Baden-Württemberg, Germany and Europe. The close cooperation with the plant engineering companies involved in the HyFaB opens up exciting new opportunities for us,” says EKPO CCO Julien Etienne.

The project is funded by the State of Baden-Württemberg’s Ministry of  Environment, Climate Protection and Energy Sector with resources from the Strategiedialogs Automobilwirtschaft, a joint government and industry initiative.

SW is setting up HyFaB at its Ulm location to fast-track the mass manufacturing of fuel cells. This open industry platform serves to develop automated manufacturing and quality assurance processes and factory acceptance tests, and to commission fuel cell stacks. HyFaB is open to partners from the automotive and fuel cell supplier industries as well as mechanical and plant engineering companies, particularly small and medium-sized enterprises (SMEs).

HyFaB is a publicly funded project. The State of Baden-Württemberg’s  Ministry of Economic Affairs is providing 10.4 million euros to build a new 3,300 square-meter facility at the ZSW’s Ulm site on Lise-Meitner-Strasse. Construction work officially commenced on February 9, 2021. The German Federal Ministry of Transport has announced to provide another 30 million euros for to pursue research into industrial manufacturing and processes. Freiburg-based Fraunhofer ISE and the German engineering federation VDMA are also involved in the HyFaB project alongside ZSW.

Link to the webcam at the HyFaB construction site (scroll to the bottom of page under the Ulm eLaB tab): https://www.zsw-bw.de/ueber-uns/standorte.html#c583

Climate-neutral with hydrogen and fuel cells

Future demand for fuel cells will rise sharply for a number of reasons. One is that the European Union targets to be climate-neutral by 2050 and adopted the Green Deal in 2019 to this end. Germany is aiming for the same goal already by 2045. Green hydrogen is essential to this goal.

At least one trillion euros will be invested to put the European Green Deal into practice. The EU hydrogen strategy adopted on July 8, 2020, maps out two phases. The first term will runs until 2024 and sufficient capacity will  have been installed for the conversion of up to six gigawatt of renewable electricity into green hydrogen. Another 40 gigawatts of generative capacity are to be added by 2030, with production rising up to ten million metric tons of hydrogen.

Renewable hydrogen and its synthetic derivatives such as e-kerosene are expected to be used on a large scale as early as 2030 in all sectors that are hard to decarbonize, such as manufacturing, air travel, heavy-duty trucking and shipping. This will drive demand for fuel cells, especially in the latter two sectors.

The Zentrum für Sonnenenergie- und Wasserstoff-Forschung Baden-Württemberg (Centre for Solar Energy and Hydrogen Research Baden-Württemberg, ZSW) is one of the leading institutes for applied research in the areas of photovoltaics, renewable fuels, battery technology, fuel cells and energy system analysis. There are currently around 280 scientists, engineers and technicians employed at ZSW’s three locations in Stuttgart, Ulm and Widderstall. In addition, there are 100 research and student assistants.

Based in Dettingen/Erms, Germany, EKPO Fuel Cell Technologies (EKPO) is a leading joint venture in the development and high-volume production of fuel cell stacks for carbon-neutral mobility. The company is a full-range supplier of fuel cell stacks and components used in passenger cars, light commercial vehicles, trucks, buses, and rail and marine applications. To this end, the company draws on the industrialization skills of two established international automotive suppliers, ElringKlinger and Plastic Omnium. This joint venture’s mission is to develop and mass-produce high-performance fuel cell stacks to advance the cause of carbon-neutral mobility – on the road, rails, water and off-road.