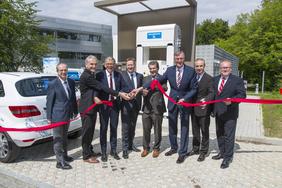 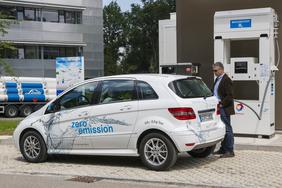 Fueling of a Fuel Cell car at the H2-station at ZSW in Ulm. 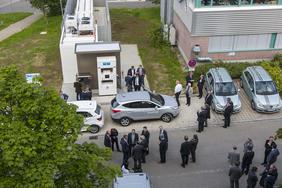 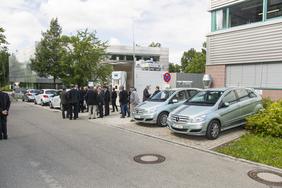 Official opening of the 21. German Hydrogen Filling Station at the ZSW

Berlin/Ulm, 15 July 2016 – The network of hydrogen (H2) filling stations in Germany is growing:
Daimler, Linde, Total, and the Centre for Solar Energy and Hydrogen Research Baden-Württemberg (ZSW) jointly hosted the official opening of another hydrogen fuel pump in Ulm today. After openings at the Geiselwind motorway service area, at two locations in Berlin, and a station in Fellbach, Baden-Württemberg, the partners have now taken a further step towards a nationwide H2 supply network.

To date, 21 hydrogen filling stations have been completed in Germany. They are funded as research and development projects by the German federal government through the National Innovation Programme for Hydrogen and Fuel Cell Technology (NIP). The existing filling stations already reach some six million people in the metropolitan regions of Berlin, Hamburg, the Rhine/Ruhr, Stuttgart and Munich. Seven stations are located in Baden-Württemberg alone, with five more planned in the region.
Within the NIP expansion programme, Daimler and Linde are participating in a total of 20 new H2 stations with a total investment of around 20 million euros. Total operates the hydrogen pump in Ulm and paid for its construction.

Located on the grounds of ZSW on Helmholtzstrasse, the new station is part of the Clean Energy Partnership (CEP). Its official opening was attended by senior representatives of the companies involved, as well as representatives from the federal government and the Baden-Württemberg Environment Ministry.

Please read the full press information as PDF below.