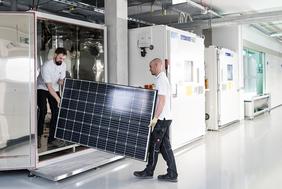 A look inside Solab, the ZSW module-testing laboratory where solar modules undergo the new heavy-duty trial to gauge their resistance to PID. Photo: Alexander Fischer / ZSW

ZSW develops an advanced method of lifetime testing for PID

Leakage currents caused by a difference in voltages between the solar cells and the grounded frame can adversely affect a photovoltaic module’s efficiency. Conventional modules are designed to be impervious to this phenomenon known as potential-induced degradation (PID). However, with system voltages increasing from 1,000 to 1,500 volts, the issue of how to prevent PID is back on the engineering agenda. Having launched a project to investigate the matter, the Centre for Solar Energy and Hydrogen Research Baden-Württemberg (ZSW) has now developed a heavy-duty test. Pushing well beyond the standard test’s boundaries, it provides more accurate information about solar modules’ resistance to PID. Simulating decades of operation, these stress tests have shown that the performance of solar modules remains practically unimpaired even after 60 calculated years of operation when equipped with embedding materials to prevent PID. Long-term forecasts like this are important to the investors, banks, manufacturers and project developers who assess the feasibility of solar projects.

Please find the complete press release below under "Downloads".