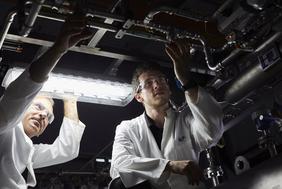 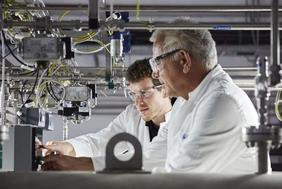 Minister of Economic Affairs Dr. Nicole Hoffmeister-Kraut pressed the green button on 2 August 2022 to switch on the electrolysis unit at the Centre for Solar Energy and Hydrogen Research Baden-Württemberg (Zentrum für Sonnenenergie- und Wasserstoff-Forschung Baden-Württemberg - ZSW). This marks the arrival at a milestone on the journey. After two years of development, the electrolyser with the “Made in Baden-Württemberg” label will now go into operation. It has been pioneering work for the future of hydrogen technology at regional government level. Around 40 enterprises from Baden-Württemberg have been instrumental in the system, contributing components, parts and know-how. The project is a showcase for the industrial potential in the state, given the various products which have already been developed or mobilised.

The Baden-Württemberg Ministry of Economic Affairs is backing the “BW Electrolysis” project, which is being coordinated by the ZSW, and is investing a total of five million euro. “The ‘Made in Baden-Württemberg’ electrolyser project is capitalising on the strength of our plant construction firms and component manufacturers and giving them the tools to become established providers and suppliers of electrolysis technologies. This is opening up the opportunity for Baden- Württemberg to benefit from first-mover advantages over international competitors and to exploit the potential for added value,” said government minister Dr. Nicole Hoffmeister-Kraut.

Germany is planning to increase the installed electrolysis capacity from its current level of around 0.2 gigawatts to 10 gigawatts by 2030. The target in the EU is to expand to 40 gigawatts. This equates to a factor of 50 in less than 10 years. The world will see a huge emerging market for the production of green hydrogen in the coming years. With an excellent mechanical and plant engineering sector and a strong supply industry, Baden-Württemberg boasts the perfect industrial profile for the future export of electrolysis technologies from the federal state to the world. The aim of the project is therefore to push the development and industrial series production of electrolysis products – from components to fully integrated systems – at regional government level.

“We want to work with the enterprises to accelerate the routes to market for electrolysis, and we have succeeded in boosting this technology of the future, with more than 40 companies from Baden-Württemberg contributing components, technologies and know-how to our demonstration system, and more than 70 enterprises joining in the conversation in the industry about the project. These are impressive figures which show the breadth of interest throughout the industry in entering this new business segment,” said Dr. Marc-Simon Löffler who heads up the department of Renewable Fuels and Processes at the ZSW.

The “Made in Baden Württemberg” demonstration system is an alkaline high-pressure electrolysis unit (30 bar) developed by the ZSW with an electric power rating of one megawatt and a production capacity of around 20 kilogrammes of hydrogen per hour. This is enough to fill about 80 fuel cell cars, 20 fuel cell buses or fuel cell trucks every day. The system is modular in design and so the technology has the scalability to be upgraded to higher performance classes and the flexibility to be adapted to different customer requirements or site conditions.

The quest to roll out the system on an industrial scale was flanked in particular by work on the further development of the electrolysis stack technology, which is the heart of the system and has been patented by the ZSW, with a view to increasing the efficiency of the electrolysis process and reducing the production costs for green hydrogen.

Hand in hand with industry

“We have already managed to initiate several product developments in the course of the project and push ahead with the expansion of production capacity at regional government level,” explained Dr. Marc-Simon Löffler. It became clear in the process that close partnerships in applied research and industry settings can bear fruit when it comes to carving out rapid routes to market for hydrogen technologies. One example of this is the cooperation with Ecoclean, an industrial enterprise in Filderstadt which will roll out the electrolysis system technology developed by the ZSW and is planning the series production of around 80 electrolysis systems per year in the coming years. EBZ of Ravensburg is intending to mass-produce electrolysis stacks based on the ZSW technology by 2024 at the latest. Nürtingen-based company Heller is looking to the ZSW for support with its plans to use a coating process from the automotive industry for the mass production of electrode coatings.

There are hopes of recruiting further companies for the roll-out of the technology on an industrial scale – including in view of the flagship H2 GeNeSiS hydrogen project taking in the greater Stuttgart area as a model region where the ZSW demonstration system is due to feed  hydrogen into a hydrogen pipeline along the river Neckar from 2024 onwards and further expand the industrial network at regional government level.

A launch event with more than 70 companies to date has been organised at the ZSW as part of the project in a bid to widen the conversation and enable enterprises to join the forthcoming market ramp-up at an early stage. Enterprises will be given detailed information about the technology and will be told about the various standards required of the components and assemblies to help them get started with electrolysis technology. The research institutes working on the project under the leadership of the ZSW included the German Aerospace Center in Stuttgart (Deutsches Zentrum für Luft- und Raumfahrt Stuttgart), the German Institutes of Textile and Fiber Research Denkendorf (Deutsche Institute für Textil- und Faserforschung) and the Hahn-Schickard Society for Applied Research in Stuttgart (Hahn-Schickard-Gesellschaft für angewandte Forschung Stuttgart).

The 230 components installed in the electrolysis unit in total include the following:

The electrolyser consists of two electrolysis stacks, each with an output of up to 0.5 megawatts