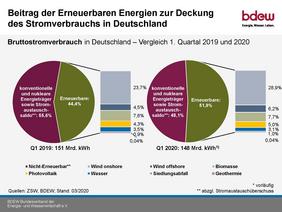 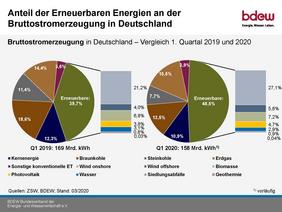 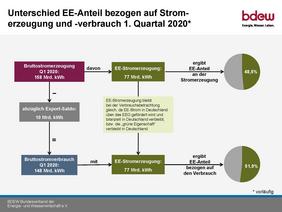 The pressure to expand renewables by breaking the gridlock and securing investments is mounting in face of a challenging economic situation.

Renewables covered around 52 percent of gross power consumed in Germany during the first quarter of 2020. This all-time high was driven by a combination of one-off events. Preliminary calculations by the Centre for Solar Energy and Hydrogen Research Baden-Württemberg (ZSW) and the German Federal Association of Energy and Water Management (BDEW) yielded this figure. February’s record winds were followed by an unusually sunny March. Power consumption was also down by one percent from the same period last year. This dip is attributable to the relatively weak economy and a decline in industrial production in the last week of March triggered by the corona crisis. The amount of conventional power fed into the grid decreased markedly as renewable sources were given priority and power plants shut down in late 2019. These factors converged to create the conditions for renewable sources to furnish more than half of the power consumed in the first three months (Q1 2019: 44.4 percent). However, these were special circumstances, so it remains to be seen if the trend will continue throughout 2020 – especially since the first quarter regularly shows a higher renewables‘ share due to weather conditions.

Please find the complete press release below under "Downloads".