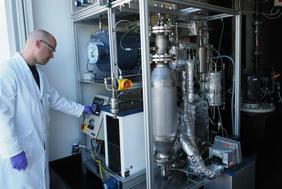 The ZSW has been conducting research into direct air capture for many years. Photo: ZSW 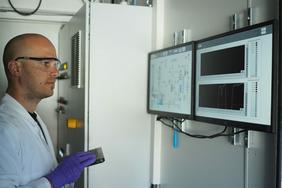 In running industry workshops the ZSW is keen to make the enter- prises fit for market entry in this technology of the future. Photo: ZSW

Direct air capture (DAC) is one of the future technologies that will be essential to achieve the climate targets without jeopardising the economy and compromising our standard of living. DAC is a process used to extract carbon dioxide (CO₂) from the atmosphere. The Centre for Solar Energy and Hydrogen Research Baden-Württemberg (Zentrum für Sonnenenergie- und Wasserstoff-Forschung Baden-Württemberg - ZSW) is preparing the DAC technology for use on an industrial scale so that climate neutrality can be achieved more quickly, opening the door to new potential ways of adding value for industry.

In the direct air capture process, the ambient air flows through an absorber which extracts some of the carbon dioxide. The CO₂ obtained after desorption and concentration has a level degree of purity and can then be used as a raw material for the chemical industry, for example, or for the synthesis of basic chemicals like methanol and climate-neutral fuels for air travel and international maritime shipping. There is precious little scope for electrification in these applications therefore there will still be a need for carbon-based energy sources in these fields in the long term.

There are plans to join forces with companies from Baden-Württemberg to prepare for the industrial application of the DAC technology in the “DAC-BW” project which is funded by the Baden-Württemberg Ministry of Transport. Companies in the mechanical and plant engineering sector and in the supply industry look set to be the main enterprises involved in the project. “It is important to establish the road map for a sustainable future now. Our DAC technology is a very good starting point for a rapid advance with a viable energy strategy for the future,” said Dr. Marc-Simon Löffler who heads up the department of Renewable Fuels and Processes at the ZSW.

All the companies can play their part in the project and join in the conversation in the industry – start-ups, small and medium-sized enterprises, and large international corporations operating in the mechanical and plant engineering sector. “We want to bring together the strands of expertise in industry in an integrated approach with nationwide impact. We will harness the regional value added in this way and at the same time contribute to the development of new business segments. The driving force behind the energy transition in Germany is and will remain its strong economy,” added Dr. Marc-Simon Löffler, emphasising the rationale underpinning the strategy.

There are plans to run a direct air capture research facility at the ZSW in realistic conditions which will serve as a prototype for industry. The facility will boast a generation capacity of up to 100 tons of CO₂ per year and will be procured with funds from the Baden-Württemberg Ministry of Economic Affairs.

The factories of the future

The factories of the future could come from Baden-Württemberg. Given the density of its industry and the strength of its mechanical and plant engineering sector in particular, Baden-Württemberg would be destined to take on a leading role in developing and scaling DAC technology for export within the EU and worldwide.

In running industry workshops alongside the other measures, the ZSW is keen to make the enterprises participating in the project fit for market entry in this technology of the future. The future markets for CO₂ as a raw material will be analysed as an add-on in the DAC-BW project, and the technology will be compared with possible alternative sources of CO₂. This will allow an estimate of the CO₂ requirement in Germany, Europe and worldwide, which will in turn serve as a basis for identifying the potential for added value and job creation in Baden-Württemberg. The ZSW is also cooperating in the project with the German Aerospace Center (Deutsches Zentrum für Luft- und Raumfahrt - DLR) which is providing support by way of flow simulations for the research facility.

The ZSW has been conducting research into direct air capture for many years and has already demonstrated the feasibility of efficient, easily scalable and, most importantly, cost-effective DAC technologies. In the method developed by the ZSW, CO₂ is separated from the air using a modified amine gas treating process. The energy consumption can be covered in a resource-efficient way with inexpensive renewable electricity and waste heat from the synthesis of so-called e-fuels or other industrial processes. The outstanding features of the process are the high degree of CO₂ purity and the simple and low-maintenance technology – the ideal prerequisite for roll-out on an industrial scale by a factor of 100 or 1,000.

The industrialisation would also significantly reduce the production costs for capturing CO₂ from air. At the moment it still costs several hundred euro to produce one ton. The aim is to reduce the generation costs by scaling the technology and running the systems in regions with favourable power generation options, such as South America, North Africa and Australia. The ZSW research scientists expect that it will be possible to reduce the costs to below 100 euro per ton of CO₂ . The Ministry of Transport has allocated 1.39 million euro in funding to the project.