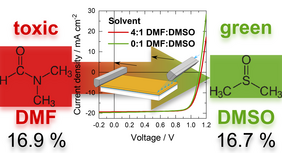 Perovskite solar cells are brightening the prospects of photovoltaics. Easy and inexpensively made with ink, these cells recently set records in the lab with efficiency ratings as high as 25.7 percent. On the downside, nearly all manufacturing processes for these cells involve hazardous solvents such as dimethylformamide that adversely impact health and the environment. To coat large-area perovskite solar cells on an industrial scale, manufacturers urgently need a process that uses more benign solvents. The Centre for Solar Energy and Hydrogen Research Baden-Württemberg (ZSW) has made a major stride towards that objective. Its researchers developed a coating process for perovskites that uses a single ecofriendly solvent, dimethyl sulfoxide. The ZSW applied this method to produce a solar cell nearly as efficient as cells made with the toxic solvent. The journal ACS Applied Energy Materials has published a paper on this scientific advance.

For several years now, researchers and manufacturers have been focusing on solar cells that use layers of perovskite as the light-absorbing material. Perovskites are materials that have the same crystal structure as the eponymous natural mineral. “Some compounds in this class of materials exhibit excellent optical and electronic properties – a basic requirement for achieving higher solar cell yields,” says Dr. Jan-Philipp Becker, the head of the ZSW’s Photovoltaics: Materials Research department. “What’s more, these materials are abundant on Earth and cheap. They could enable manufacturers to soon offer highly efficient modules at even lower costs than silicon-based modules have today.”

The benefits of perovskite layers do not end there. As a type of thin-film technology, these layers can also be deposited on plastic. This results in light, flexible modules that can be used in ways conventional solar modules cannot. For example, they seamlessly integrate into vehicles and light industrial sheds that cannot handle heavy loads.

Perovskite precursors have to first be dissolved so they can be applied in uniform layers to the substrate. This requires solvents that usually contain dimethylformamide (DMF), which is hazardous to health and the environment. This toxicity hampers efforts to scale this process up to industrial production. Manufacturers would have to produce and dispose of larger quantities of the solvent and take even more stringent occupational safety measures. Costs would rise.

This dilemma has sent researchers and manufacturers out in search of environmentally compatible solvents that are suitable for industrial applications. This use case requires chemical properties that very few substances exhibit. Jan-Philipp Becker’s team thoroughly investigated pure dimethyl sulfoxide (DMSO) to see if it could serve this purpose. DMSO actually looks to be unsuitable for this coating process. It is a solvent with high surface tension and viscosity, which leaves an uneven layer deposited on the solar cell. DMSO also makes it difficult to control the crystallization process, which often results in small perovskite crystals and a cell that generates less solar energy.

ZSW researchers found two workarounds for these issues. They modified the film formation process and improved the drying method to increase the efficiency of perovskite solar cells produced with DMSO. “We used a surfactant made of silicon oxide nanoparticles to coat the perovskite solar cell and adapted the drying process,” says Becker. With these two improvements, the process now produces uniform layers with large crystallites.

The 0.24-square-centimeter perovskite solar cells produced at the ZSW achieve 16.7 percent efficiency, just 0.2 percent less than the perovskite solar cells of the same size that the institute makes with DMF. The researchers use the blade coating method to this end. It is scalable to larger production numbers and therefore suitable for industrial applications.

This scalability is what distinguishes blade-coated cells from spin-coated cells that have achieved record efficiencies of 25.7 percent. Although spin coating produces more efficient cells, this method does not lend itself to industrial-scale production of large modules.

“These new research findings are an important milestone on the path to industrial production,” says Becker, clearly delighted. “Now we will further optimize the manufacturing process and produce larger modules.” ZSW researchers now aim to demonstrate perovskite solar modules as large as 30 by 30 square centimeters made with industrial-grade coating methods. With this size, all basic challenges of a further upscaling to commercial module formats would already be overcome.

This effort was funded by the European Union and the German Federal Ministry of Economic Affairs and Climate Action (BMWK) as part of the PERCISTAND and CAPITANO research projects. A paper giving an account of this work entitled “One-Step Blade Coating of Inverted Double-Cation Perovskite Solar Cells from a Green Precursor Solvent” was published at https://pubs.acs.org/doi/10.1021/acsaem.1c02425